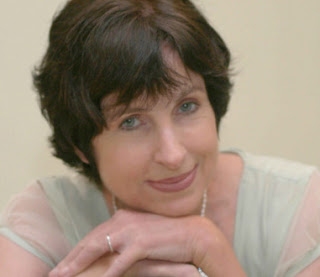 Pamela Binnings Ewen practiced law for twenty-five years and is a retired partner in the international law firm of BakerBotts, L.L.P. She is the author of The Moon in the Mango Tree, a 2009 Christy Award finalist. Her first book was the acclaimed non-fiction Faith On Trial endorsed by her law partner, former Secretary of State, James A. Baker III. In connection with Faith On Trial, Pamela is also featured along with Gary Habermas, Josh McDowell, Darrell Bock, Lee Stroble, and others in the film Jesus: Fact or Fiction, a Campus Crusade for Christ production. Secret of the Shroud will be released by B&H Publishing Group on September 1, 2010, and Dancing On Glass is set for release in 2011. Secret of the Shroud is the fast-paced, tense story of an embittered and powerful clergyman who learns an ancient secret, confronting him with truth and a choice that may destroy him.

Pamela and her husband, Jimmy, live in Mandeville, Louisiana, just outside New Orleans, across Lake Pontchartrain. She is on the board of directors of The Tennessee Williams Festival in New Orleans, The Faulkner Society, and co-founder of the Northshore Literary Society. In 2009 Ewen was honored as Literary Artist of the Year by the Cultural Arts Commission, St. Tammany Parish, Louisiana. Join Pamela on http://www.pamelaewen.com/ for more information.

Following the meeting at La Hacienda Ranch, Pamela will have a book signing at Mardel's in Hurst. 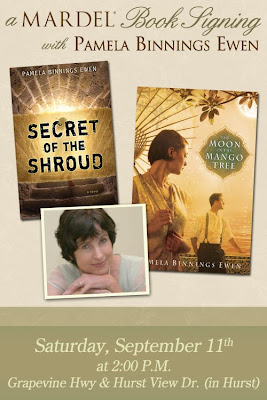 So looking forward to this. I met Pamela in Karen Ball's LNC. We chatted about our beloved New Orleans. I bought her Moon in the Mango Tree, and can't wait to hear what she has to say about the shroud.